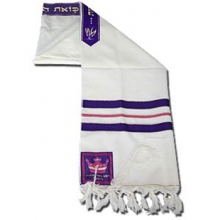 Prayer Shawl for women featuring scriptures from the Book of Esther.

The Tallit’s fabric is a blend of polyester & wool with purple, pink and gold stripes. The four corners feature Esther’s regal symbols: The royal crown and a majestic robe with golden wand.

The following scriptures from the Book of Esther appear on either side and on the neck band:

The Tallit, or Prayer Shawl, is the most recognizable sign of Jewish worship. It is worn at prayer, or a by a groom at his wedding. The origin of the Tallit lies in Numbers 15 calling for the attachment of fringes to the four-cornered garments, worn during Biblical times, as a reminder of the 613 commandments of the Lord.
Today, a growing number of Believers consider the use of a Tallit as most important. Wrapping oneself with the prayer shawl is meant to assist in focusing on prayer. It is symbolic to wrapping oneself with G-d’s Love as one prays.